Warning: count(): Parameter must be an array or an object that implements Countable in /home/customer/www/grandcrewco.com/public_html/wp-includes/media.php on line 1204

There is much to be said about living and working in the Napa community. There are so many great people who contribute to our unique culture that it’s hard to recognize them all, but if we work together, we can at least try to recognize as many as possible. That’s why when we had an opportunity to work with Honig Wine to recognize one very special person, we didn’t hesitate.

A man I met one day was having major vigor and fruit set problems with his vineyard; his name was Roy. We met in town while I was working on my boat at LJ’s a local shop. After talking with John, the owner of LJ’s, about my work, he asked me up to his vineyard.

When I arrived, I realized just how sick Roy’s vineyard was, I immediately signed on to help. While working to repair the damage to his vineyard, it just so happened that I got Honig to take a chance with me and purchase the grapes from the first recovered crop.

That was five years ago.

In 2012, after I began repairing the vineyard, Roy’s son Scott died a hero. He was a father of two and firefighter in Marin, CA and he passed away due to job-related cancer. As a way to honor his service to the community, we felt that there was one way that California Wine Country could memorialize him.

We contacted Honig Wine and shared with them Scott’s tragic story and asked if they could create a vineyard designate named “Scott’s Vineyard”. Kristen, the wine maker, said she would present it if the grapes made exceptional wine.

We made the grade.

Honig 2013 Cabernet Sauvignon: Scott’s Vineyard was presented to Roy and Diana, Scott’s parents, and it was this news and gift that is truly one of the best moments of my carrier.

Get the 2014 ASEV Grape Berry Report 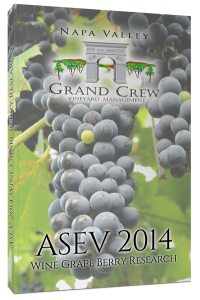